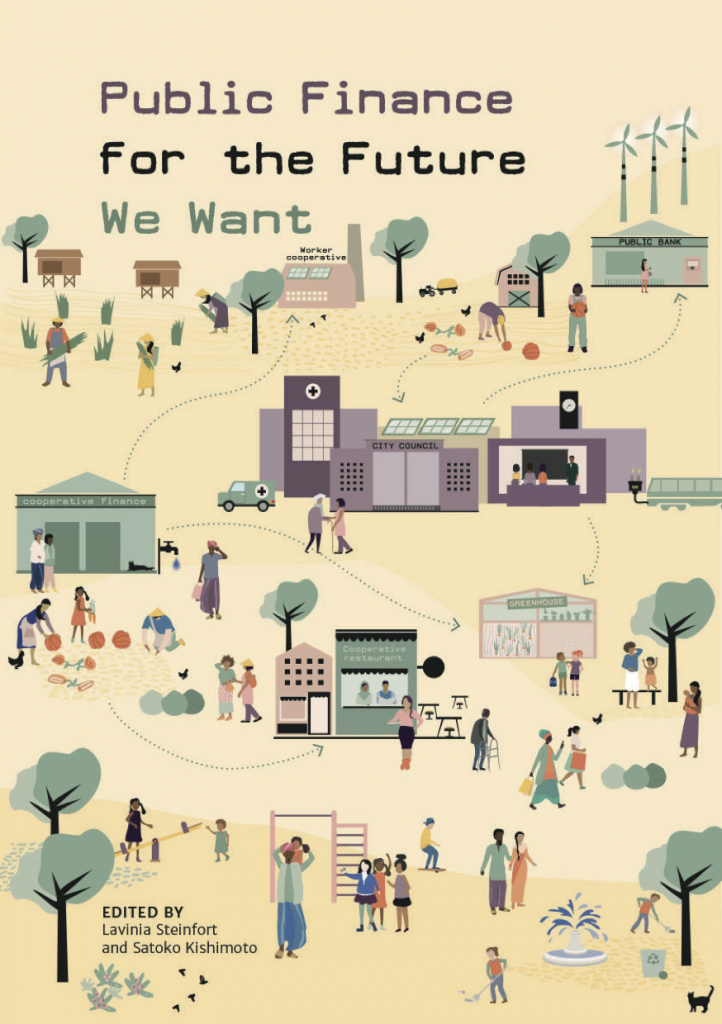 This essay is part of the book Public Finance for the Future We Want, you can find the entire collection of essays here.

Campaigners, activist scholars and progressive policy-makers have much to win from connecting the issues they are fighting for – be it climate justice, racial equality, feminism, a well-being economy and universal public services – to the realm of money, taxes and finance.

With this book we hope to have shown the funds at our disposal to meet our collective everyday needs. Once these are spent and invested by publicly owned and democratically organized institutions, and no longer extracted by the private sector and market mechanisms, we can start to redirect wealth to finance the future we want.

Below we suggest 15 campaign and policy recommendations to reclaim money and finance systems for building life-sustaining economic democracies.

At the same time we acknowledge that this list is far from comprehensive. We invite you to share with us [email: publicfinance@tni.org] your actions, tactics and strategies that have proven effective tools for transformation.

We believe that only a serious public debate, popular pressure and society- wide mobilization can build a progressive politics of money and finance.

1 – Build robust democratic ownership of public financial institutions by ensuring that worker, user and community representatives are on supervisory or director boards (along with requirements for gender and racial representation). The principle of affected interests should be upheld to ensure that those most impacted by a public bank have the decision-making power to ensure it is fulfilling its mandate and mission, and guaranteeing access to finance and banking as a right and public service. The principle of subsidiarity should be followed to decentralize decision-making power as much as possible.

Banco Popular, owned by 1.2 million Costa Rican workers, is an example of what democratic ownership can look like. Similarly, the ‘Belfius is ours’ campaign proposal to have civil society representatives on supervisory boards at the local, regional and national levels puts the principle of sub- sidiarity into action.
For background, read chapters 8 and 9

2 – Establish a binding public mandate and a socio-ecological mis- sion for public financial institutions. This can ensure that profits are not extracted, but rather reinvested in society to achieve long-term, equitable development. Social actors should be able to define the mandate of the institution. For example, the mandate of a community bank could specify that it provides financial services to particular groups that typically face exclusion and barriers to access, such as low-income households, coop- eratives and small and medium-sized enterprises. The mission should say that the institution serves the well-being of its population. All this would better equip banks to support socio-economic and environmental objectives.

Germany’s local saving banks (Sparkassen), for instance, are legally obliged to promote financial inclusion by providing savings and lending to small and medium-sized enterprises. Municipalities are put in charge and cannot privatize the bank or distribute profits. India’s National Bank for Agriculture and Rural Development similarly has a mission that enables it to finance soil and flood projection schemes in order to adapt to the impacts of the climate crisis.
Read chapters 8 and 9

3 – Create local, democratic and publicly owned banks to finance investments to meet people’s needs. A public bank enables a local or regional government to deploy public funds locally in the form of loans, (re)investments and financial services. Public banks are better suited to providing equity-oriented financing where profit-maximizing is not the primary motivation.

In 2016, four years after the private Bank of Hawaii withdrew from American Samoa, the Territorial Bank of American Samoa was created. The motto of this public retail bank is Faletupe o le Atunu’u (the People’s Bank). Across the United States, from Boulder and Los Angeles to Oakland and New York, vibrant citizens’ campaigns are, with increasing success, creating democratically controlled public banks. A popular referendum could enable local governments to put the right laws and regulations in place to create their own public bank.

Raise, create and spend public money for people and planet

4 – Use public financing to directly invest in public services and low- carbon infrastructure, instead of private deals, such as public-private partnerships (PPPs). PPPs are attractive to some jurisdictions, because they bypass spending controls and keep debts off public balance sheets. However, private investors are interested in short-term investments that make quick profits, leading to higher public costs in PPP deals over the long term and the prioritization of certain types of investments over others. Society needs long-term investments to rebuild public services and upgrade our heating, electricity and transportation infrastructure to be run on renewable sources.

Worldwide, public finance institutions, such as public banks, have over US$73 trillion in assets, which could be invested directly in public services and infrastructure. In Bangladesh, the publicly owned Infrastructure Development Company Limited (IDCOL) has provided finance to install three million solar energy systems in rural areas, electrifying the homes of thirteen million people. The German state investment bank Kreditanstalt für Wiederaufbau (KfW) provides below market-rate loans for small and medium-sized manufacturers.

5 – Curb private money creation by reclaiming privatized banks. When democratic and publicly owned banks rather than private banks are allowed to create money through lending, they can invest in sustainable infrastructure and public services, which in turn reduces inequality and redistributes wealth. In the Netherlands, the ‘Our Money’ campaign is calling for bringing money creation back under public and democratic control.

6 – Transform the public money system by demanding that governments use their money-making powers to create funds for much-needed public spending in the face of the urgent climate and inequality crises. This is done first by democratically deciding how much money should be issued to build climate-friendly public services and infrastructure, and second how much should be retrieved through progressive taxation once spending has occurred.

7 – Expose the corporate welfare model by carrying out a transparent citizens’ audit of the government budget – at the local, regional or national level – to reveal the amount of public funds that are benefitting big business and to set up citizens’ platforms to discuss alternative spending of those resources. The International Citizens’ Debt Audit Network assembles networks and movements from 12 European countries in order to implement audits as a strategy to fight austerity measures.

8 – Demand a broader public mandate with social and environmental targets for central banks in order to achieve full and secure employment and to finance an equitable transition towards a sustainable and low- carbon society. Such a mandate would first ensure that the central bank’s power to issue public money would not create another financial bubble, but rather finance social and ecologically sound economic activities. Second, this would allow central banks to finally use their toolbox to help redirect private financial flows towards sustainable activities. Finance Watch and Positive Money Europe advocate for a transparent, accountable and democratic European Central Bank to better connect monetary and fiscal (spending) policies.

9 – Build popular pressure to force central banks to buy out the big private energy companies in order to keep fossil fuels in the ground. The buyout should marry a binding mandate to decommission fossil fuels with increased investment in democratically renewable energy, all the while leaving no worker or community behind. The public buyout proposal could and should be part of the push for a Green New Deal in the United States, which is a set of measures that aims to address the climate crisis, racial injustice and economic inequality.
Read chapter 12

10 – Create a Citizens’ Wealth Fund by implementing higher levels of taxation of public and private wealth, including robust inheritance taxes. This would give all citizens a direct stake in the economy, boost public support, transfer wealth into the hands of all citizens and reduce economic inequality. Over time, this fund could pay for new public services, climate-resilient infrastructure and a regular citizens’ dividend.

11 – Dilute corporate ownership by obliging companies to transfer a growing percentage of shares, say 0.5% a year to the Citizens’ Wealth Fund. This would gradually socialize a portion of private wealth to be owned on an equal basis by citizens. In the 1980s, Sweden applied a vari- ation of this model by creating ‘wage-earner funds’, commonly known as the ‘Meidner Plan’.

12 – Deliver tax justice by stopping tax evasion and implementing a progressive tax system in which big corporations and wealthy individuals are forced to pay the highest taxes, wherever they live and operate. There should also be an accountable and participatory process to democratically decide how these revenues can maximize people’s long-term well-being.

Systemic support for the social and solidarity economy

13 – Create regional finance networks to fund production and service cooperatives in order to improve the region’s socio-economic resilience. Cooperative finance institutions could provide grants and low-interest loans to democratic enterprises that cultivate the land or provide essential services, such as housing. For example, the MOBA Housing Network in Central and Southeastern Europe enables lower income populations to collectively access finance for cooperative housing solutions that are affordable, more stable and socially owned.

By connecting rural-based agriculture cooperatives with urban, retail cooperatives, more equitable regional development can be achieved. The Malabar Meat cooperative in Kerala, southern India, shows how social alliances between peasants and workers can lead to a thriving networkof cooperatives, interconnecting rural and urban areas. Vietnam’s 1,100 People’s Credit Funds are community-based credit institutions created by the country’s central bank that have helped family farms to create their own agriculture cooperatives allowing them to become more productive.

14 – Prevent public companies and cooperative financial bodies from corporate take-overs. This could be done, for example, by inscribing in law that a popular referendum should always precede any kind of take-over of a public or cooperative institution. Italy’s celebrated credit cooperatives, for example, cannot legally be appropriated by members who seek a private profit, so in the event of liquidation, the remaining assets are transferred to a cooperative support fund. This safeguards against speculation and corporatization.

15 – Encourage public ‘anchor’ institutions such as hospitals and universities to purchase from and invest in democratic businesses, such as worker cooperatives, employee-owned firms and community- based social enterprises. In particular, public purchasing can encourage those who succeed on the basis of well-paid and secure employment. Local government subsidies, investments and support services can also help democratic businesses to scale-up into more resilient enterprises. If this is also combined with inclusive hiring policies and workforce development efforts, it can create career pathways for low-income, minority and underemployed populations.

In Cleveland, Ohio, the non-profit organization The Democracy Collaborative worked with local anchor institutions and philanthropy to create the Evergreen Cooperatives network, consisting of three ecological worker-owned cooperatives including a large-scale laundry, a solar panel installation and energy retrofit cooperative, and an urban greenhouse.

Since 2015, the cities of Zaragoza, Barcelona, Madrid and Coruña have actively supported the social and solidarity economy by providing cooperatives and other democratic businesses with land, buildings, low- interest loans, training and technical advice. With the support of the Madrid municipality, the MARES project has been driving the creation of a local ecosystem of social initiatives, enterprises and organizations.