Is there a culture of European solidarity? Yes, if you look at the local level. Experiments with new forms of democracy have transformed many local communities in Europe.

The Association of Energy Managers of Towns and municipalities (SEMMO) based in Prague, Czech Republic; the Berliner Wassertisch, Berlin, Germany, and GoiEner Cooperative, Ordizia, Spain have created a joint infographic based on their shared sense of European solidarity.

This infographic is an outcome of the M2M Solidarity project initiated by the Transnational Institute in Amsterdam. The project brought together 11 European community-rooted projects in groups of two or three with a brief to each produce an expression of European solidarity. Under the umbrella of M2MSolidarity these three groups have elaborated a joint infographic that explores the common problems they deal with, how they address them, and the inspiring results they have achieved.

The infographic is available for free use in 5 languages. Please use to demonstrate how communities around Europe are solving our common problems with solidarity and cooperation. 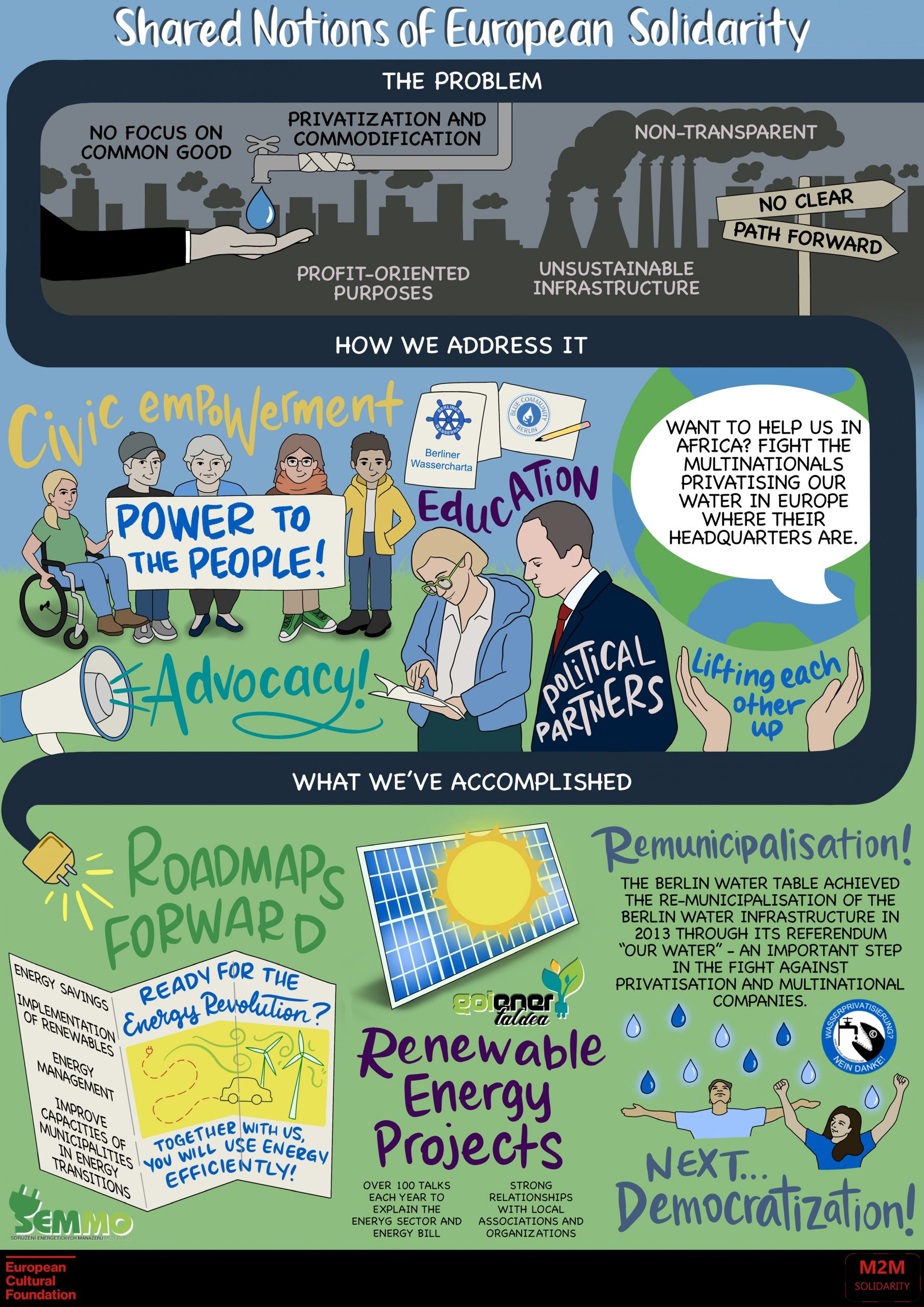 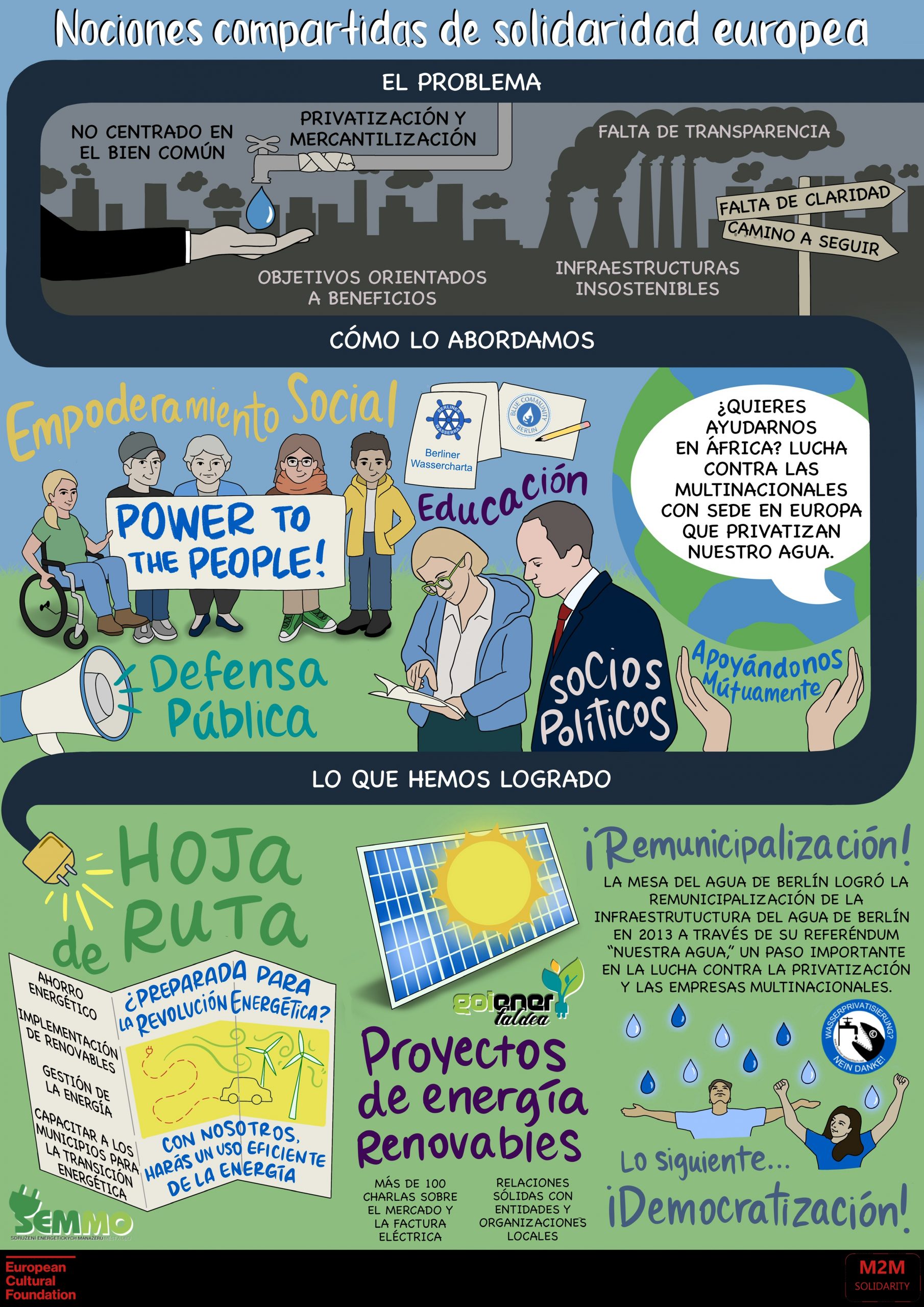 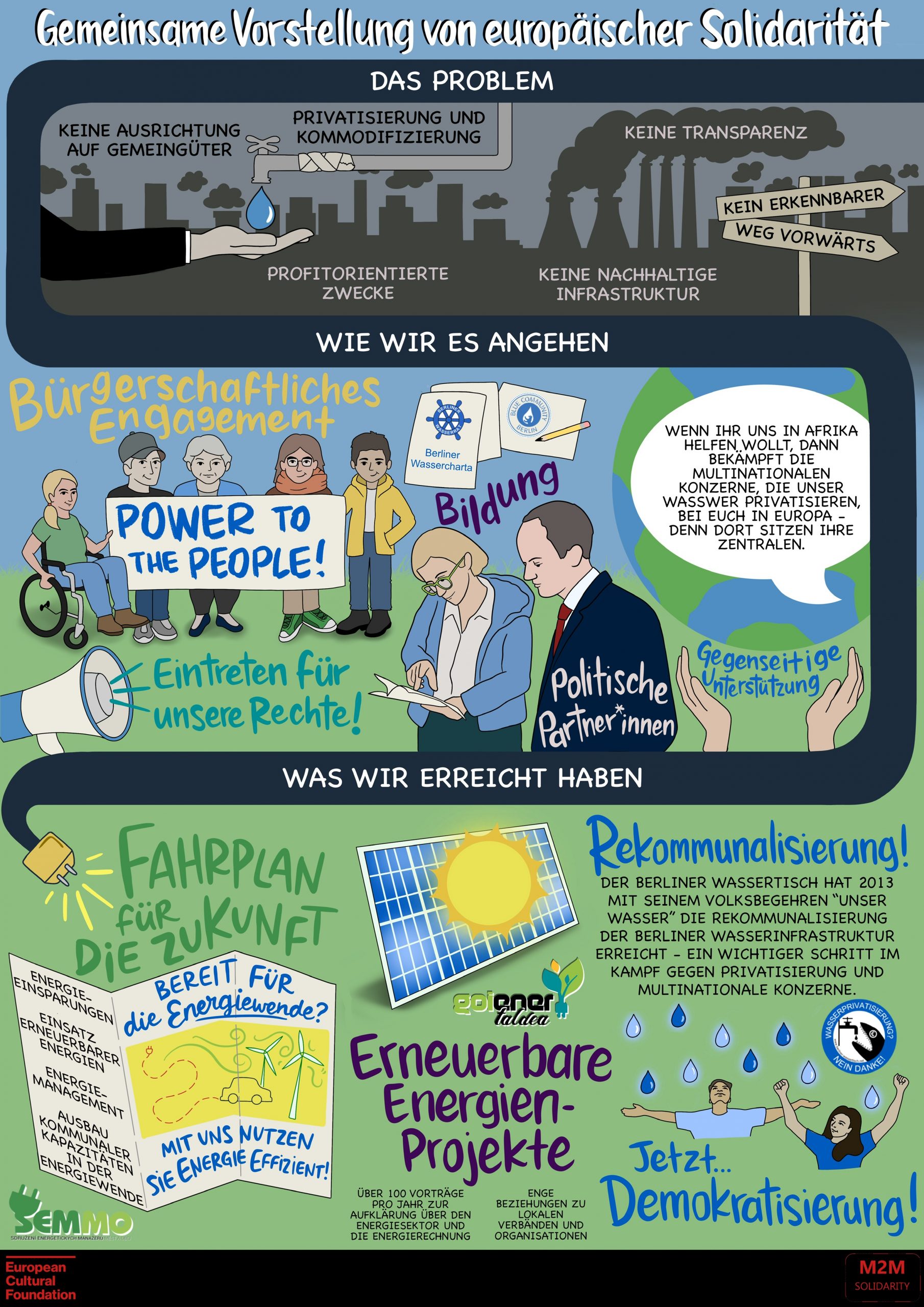 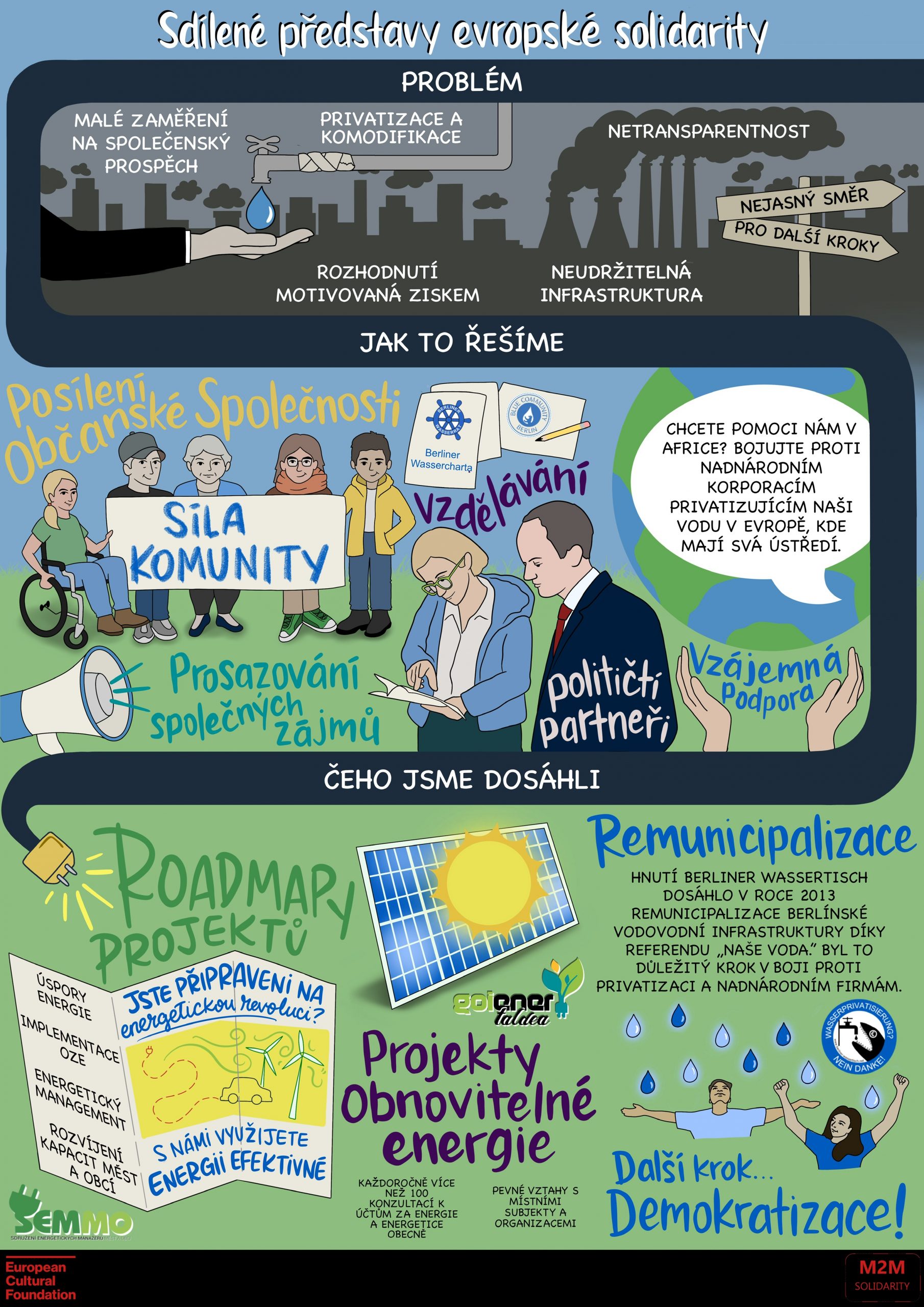 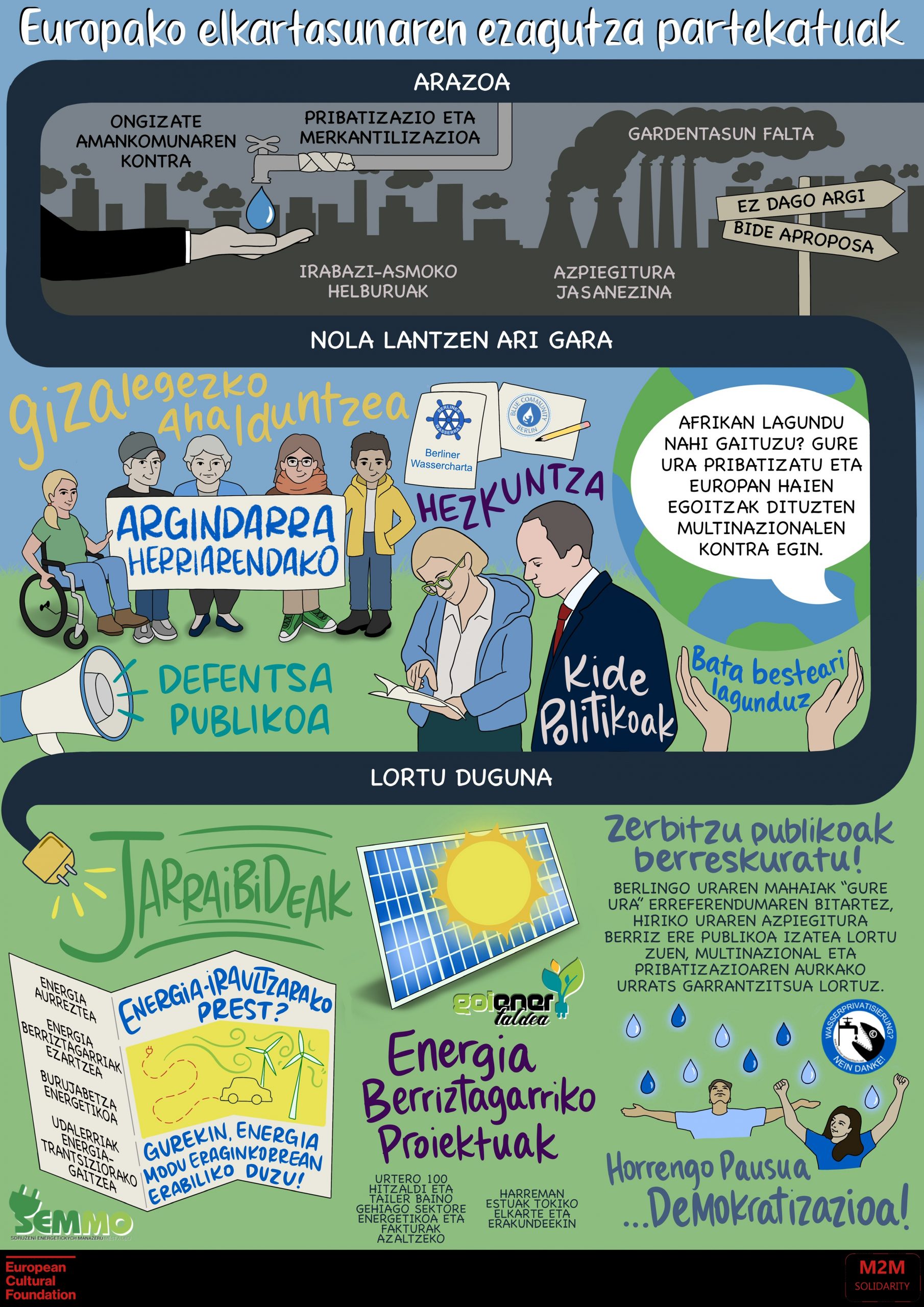 About the participant organisations

In 2011, the Berlin Water Table made history, winning not only the first ever Berlin referendum but also writing a law to disclose the secret partial privatization agreements at the BWB. With 666,235 votes, political pressure mounted to get back the shares in the Berliner Wasserbetriebe sold by the Berlin Senate to private companies in 1999, thus initiating the remunicipalisation that was carried out in 2013. The news not only thrilled the Berlin population but also encouraged water activists in many other cities to take their water utilities back into public hands. Since then, the Berlin Water Table has published a “Berlin Water Charta” and founded the “Berlin Water Council” as a participative instrument of direct democracy.

GoiEner is a cooperative which is concerned with the generation and consumption of renewable energy and with the objective of reclaiming energy sovereignty. It wants citizens to regain control over this basic need and to make them aware of its importance, thus promoting responsible and sustainable energy consumption. Its aim is to help people whose energy needs are not being met and who are excluded by the big energy corporations. The cooperative – set up in 2012 – is now a successful non-profit energy supplier

The M2M Solidarity project creates peer-learning exchanges between these collectives, and seeks to contribute to a revival of European solidarity.